“Don’t use the photo of the quilt, too political”

Friday 11th November. Stephen Barclay MP, the current Health Secretary, visited the Community EcoHub & Heritage Centre in Wisbech, after his Rememberance Day duties were over at the War Memorial.

“Do you want to meet him on his visit to the centre and the quilts?” was the question put to Steve Carne by the manager of the centre. After some discussion with the team it was obviously an opportunity not to be missed.

Tuesday 8th November we emailed some trusted campaigners around the country, letting them know there was a possibility that the quilts were going to be visited by Stephen Barclay. We put it to them: “What would you ask the Health Secretary if you were face to face with him and he was actually willing to listen?”. The questions came in thick and fast. Some too angry, some too sarcastic, but some were spot on.

Steve knew that the Health Secretary would not afford a great deal of time to being asked questions in public so how on earth was he going to put them to him? The answer came in a flash on the Wednesday. Turn them into a quilt…

Wednesday 9th November the evening was spent in Cambridge with Heather, longtime college friend, Threads contributor and textiles teacher with a sewing machine.

Steve printed the questions onto canvas inkjet printable material (oh yes it’s a thing!) and Heather stitched on her trusty Bernina. 90mins of cutting squares to size, choosing threads and cups of tea led to the beginnings of a quilt.

So after a tour of the crafts, the historical booklets, pleasant handshaking with volunteers, the Health Secretary was introduced to “Steve, the curator and coordinator of the quilts project”. Steve remembers the event.

“I’d decided the best approach was to keep very calm. Even though I felt like Miriam Margolyes inside. I told him the new “Dear Mr Health Secretary” was a work in progress started just this week in his honour. He nodded with a smile. Then he saw the questions.”

The Health Secretary ridiculed this question saying the NHS was centrally funded and that £182 billion was enough (that’s a joint Dept of Health & Social Care figure we’ve now discovered). Since then it appears that he has openly said he is not asking for any more money from Jeremy Hunt.

Steve explained the question was not about funding but about the breaking up of the NHS into 42 ‘Integrated Care Systems’ based on the American – the world’s worst model – Accountable Care Organisations.

At this point the Health Secretary became defensive and threw Foundation Trust hospitals and “points of law” into the mix. Steve explained that members of the public were now worried that the fragmentation left the NHS as a poorly functioning two-tier health system where paying is becoming the norm.

The Health Secretary said “Well obviously this is a conversation for another time” and made a hasty move to the main doors. “He couldn’t get out fast enough!” observed one volunteer.

He left, but not before he was handed a paper version of the questions and invited to reply to our email address.

Throughout the whole visit the Health Secretary was accompanied by his photographer assistant who, with the biggest (quite unnecessary) lens, helped to boost his presence and intimidate the proceedings – including the volunteer taking photographs. “Don’t use the pics with the quilt. Too political”, Barclay’s photographer told the volunteer.

Too political? The Health Secretary, a POLITICIAN with the ultimate decision making power regarding the nation’s health, photographed with a quilt and some genuine questions that need genuine answers is… “TOO POLITICAL?”

Welcome to democracy in England 2022 style.

If the assistant with the big lens sees this post we would love to know what he meant by the expression “too political”. Is he referring to political party battles and assuming we are part of that? We’re not.

Right from the outset of this project, we have always made it clear that Threads Of Survival is political. ‘Small p’ political. But we are not PARTY Political. Party politics and reducing our society to a “us or them” game is why the country is in a mess.

Politics is about people. All of us. Everything we do, everyday decisions we make – it’s all political. And our quilts and textiles are drawn from everyday life and everyday people. Art and politics intertwined.

Saturday 12th November Steve took the first National “Threads of Survival” Quilt and “Dear Mr Secretary” to the NHSSOS conference in London. The questions were met with smiles and nods and enquiries as to the Health Secretary’s reaction to them. We received a few more questions that are making their way to the work in progress.

If you have a question you’d like to add to our “Dear Mr Health Secretary” quilt please use the comments below or email us at info@threadsofsurvival.org

We look forward to seeing them. And we’ll let you know if we hear anything from the Health Secretary.

Even Buster knows that. 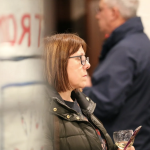 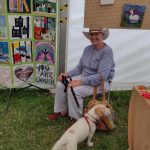 A Day Out in Emley 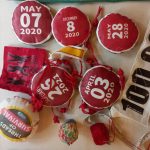 Hiding Under a Covid Cover? 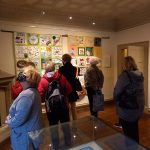 Next online discussion group will be focusing on t

We are grateful to the Arthur Wainright Reform Trust for their support in developing this website.

We use cookies on our website to give you the most relevant experience by remembering your preferences and repeat visits. By clicking “Accept All”, you consent to the use of ALL the cookies. However, you may visit "Cookie Settings" to provide a controlled consent.
Cookie SettingsAccept All
Manage consent

This website uses cookies to improve your experience while you navigate through the website. Out of these, the cookies that are categorized as necessary are stored on your browser as they are essential for the working of basic functionalities of the website. We also use third-party cookies that help us analyze and understand how you use this website. These cookies will be stored in your browser only with your consent. You also have the option to opt-out of these cookies. But opting out of some of these cookies may affect your browsing experience.
Necessary Always Enabled
Necessary cookies are absolutely essential for the website to function properly. These cookies ensure basic functionalities and security features of the website, anonymously.
Functional
Functional cookies help to perform certain functionalities like sharing the content of the website on social media platforms, collect feedbacks, and other third-party features.
Performance
Performance cookies are used to understand and analyze the key performance indexes of the website which helps in delivering a better user experience for the visitors.
Analytics
Analytical cookies are used to understand how visitors interact with the website. These cookies help provide information on metrics the number of visitors, bounce rate, traffic source, etc.
Advertisement
Advertisement cookies are used to provide visitors with relevant ads and marketing campaigns. These cookies track visitors across websites and collect information to provide customized ads.
Others
Other uncategorized cookies are those that are being analyzed and have not been classified into a category as yet.
SAVE & ACCEPT